Coming soon everyone will have access to more descriptive TLDs, such as BUILD, MENU, BIKE, and more... 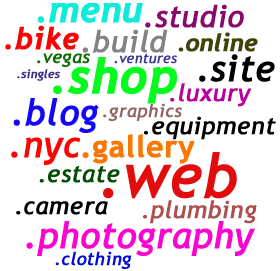 The Internet is abuzz with the news that new TLD (Top Level Domains) are coming available in a few weeks.

TLDs are the "com" and "net" and "org" part of your domain name, ie; MontagueWebWorks.COM has a TLD of COM. COM has been around since 1995 when the Internet was opened up to commercial entities. Before that there was only MIL, EDU and GOV. You can read a history of Top Level Domains here.

Coming soon everyone will have access to more descriptive TLDs, such as BUILD, MENU, BIKE, and more. Almost 900 new TLDs! It's almost too much, but we are all certainly moving into a new era of the Internet.

Here are some excerpts from the Wikipedia article, linked above:

ICANN expects the new rules to significantly change the face of the internet. Peter Thrush, chairman of ICANN's board of directors stated: "Today's decision will usher in a new internet age. We have provided a platform for the next generation of creativity and inspiration. Unless there is a good reason to restrain it, innovation should be allowed to run free."

Industry analysts predicted 500–1000 new gTLDs, mostly reflecting names of companies and products, but also cities and generic names like bank and sport. According to Theo Hnarakis, chief executive of Melbourne IT, the decision "will allow corporations to better take control of their brands. For example, apple or ipad would take customers right to those products." In agreement Nick Wood, Managing Director of Valideus, suggested "Your own gTLD demonstrates confidence and vision and may accelerate your brand and its value. An internet address at the Top Level is far better than registration at the 'low rent' Second Level."  However, some companies, like Pepsi, have ruled out a branded gTLD.

On "Reveal Day" June 13, 2012, it was announced that ICANN received about 1,930 applications for new gTLD's, 751 of which were contested. A lottery was held in December 2012 to determine the order in which ICANN would evaluate the 1,930 applications.

Concerns were raised over Closed Generic Strings in which the applicant would be the sole registrant for the TLD. In particular objections were raised by publishers over Amazon's .book application.

Montague WebWorks is a priority customer of GoDaddy Domain Registrations, and would be happy to help you manage and build your domain portfolio. For pricing, please go to GoDaddy and check out the new TLDs by category, or do a search on all of them. Keep in mind, many of these new TLDs will cost more than just $10 a year. Some will cost as much as $200 or more, so be advised about buying a bunch of them.